My Weekend as a Guerilla Film Maker, or "How I Learned To Love the 5 Stages of Filmmaking"


I’ll be honest: it’s been a long while since I’ve been up this early – especially on a Saturday. Writers are pretty renowned for staying up all night tapping away at their Laptops and sleeping all day, and if I’m not on a shoot, I’m probably no exception. A few of my most recent pieces were written predominantly at night, and as far as I’m concerned, waking up early is a practice best reserved for monks and nuns. But today’s the Guerilla Filmmakers’ Masterclass, and I’m keen to make an early start.
(Of course, I quickly discover I shouldn’t complain – I’m one of the lucky ones. People have come from all over the world to attend this course: Nigeria, Australia, Stockholm and the States to name a few.)

I take a right at Baker St and head through the park towards the college. On Google, it’s ominously described as “The Inner Circle,” which sounds like something out of The Wicker Man. In truth, it’s much more Brideshead Revisited, and you could probably put together a reasonable Pride and Prejudice adaptation on the grounds. People are milling about already, taking root on stone steps or low walls, congregating in clusters, sipping coffee purchased from a sort of makeshift onsite Starbucks. No one’s really talking to each other properly yet, though that's all set to change.

At 9am, we file inside the auditorium. Everyone sets about whipping out a variety of note-taking implements: exercise books, iPads, diaries, fountain pens, biros – you half-expect someone to take out a quill. There’s more talk and chatter – it’s all getting more animated – and before long, Masterclass helmer Chris Jones takes to the stage and the weekend’s officially begun.

Chris doesn’t waste time. Before long, he’s got us shaking hands with the person next to us for a full 90 seconds – Chris insists! – to find out more about them and release some of those pesky inhibitions. These 90-second chats become a bit of a trope over the weekend – and it’s easy to see why, they’re tremendously effective: the room’s quickly abuzz as people relax and start admitting that, actually, they’re not half-bad at being creative, and the reason they’re there in the first place is because they’ve something to say. Chris talks us through the importance of social media, and encourages us to querywhy we’re doing it, why we want to make films. He asks us to list a few reasons, and the results are varied to say the least.

Having talked us through the concept of “killer moments” to include in our screenplays, he then shows us his Oscar-nominated short, Gone Fishing. The killer moment, when it crops up, is overwhelming – a true Sixth Sense-style twist. In just thirteen minutes, we’re served an extremely clear-cut example of how powerful a piece of cinema can be, regardless of length – “keep it concise,” as the mantra goes.

We take a short break and return to the hall to find Chris back onstage. I’m surprised: I hadn’t realised he was to be the speaker at every step of the course. I have literally no idea where this man gets the energy to do what he does. He’s just spoken to us for two and a half hours, and he’s got another day and a half to go. I’ve half a mind to check the auditorium rafters for marionette strings holding him in place – or perhaps the button he presses intermittently throughout the class isn’t actually a gadget for moving the presentation slides forward, but a buzzer to give him innocuous electric shocks and keep him alert. Even during the breaks, he’s holding quick Q & As to the side of the stage for anyone looking for answers – it’s remarkable how willing he is to offer up his time.

The second part of the day concerns The Hero’s Journey, or the finer points of storytelling. Chris’s hero of choice is Luke Skywalker, which puts me in the dark a bit, as I’m one of about six people worldwide who’ve never seen Star Wars. Fortunately, I’ve seen enough Family Guy spoofs to get the references, so it doesn’t go over my head. We move onto the 5 Stages of Filmmaking – to sum up, Stage 1 is absolute beginner, Stage 5 is Spielberg. There’s a silence as everyone makes internal calculations to figure out which stage they’re at. You get the feeling there are a fair few attendees striving to convince themselves they’re a Stage 3 when they’ll be forced to confess they’re still a Stage 2 – I know, because I’m undoubtedly one of them.

We break for lunch at 1.30. The setup’s a bit like fetching a school dinner, (although going to school with 200 filmmakers doesn't sound far from Paradise). Later, back in the auditorium, the mechanics of filmmaking are covered, the legal side of matters, and the budget. It’s the part that any creative person is eager to pretend doesn’t exist, so naturally people start to flag. Fortunately, I’ve purchased a second latte from the onsite Starbucks, so my notes go on and on for about 12 pages, and by the end of the day, my fingers ache from typing, but I’m feeling more inspired than I have done in a long while.

Networking drinks are held in a pint-sized café round the corner from the college. Everyone’s bags are notably weighing them down more: evidently, a few copies of Chris’s GFM Handbook have been purchased… all 800 pages of it. A few hours in and we’re shooed outside by the owners: apparently we’ve gone into networking overdrive and lost track of time – though it probably makes sense to get moving if I’m to survive a second early start. Roll on, Day 2. 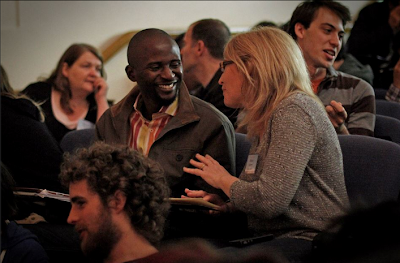 Another early start, though this time I’m ready for it. Fighting an extremely minor hangover, I’m back at The Inner Circle by 9.15am, just in time to dash through breakfast and return to the auditorium, feeling considerably full. Chris kick-starts the day with a short film about filmmaking. There’s no dialogue – only rather sobering background music as we follow a group of 20-somethings endeavouring to produce a film, from initial concept to creation to a fully-booked festival screening. Granted, it looks a bit like a John Lewis ad, but every moment is profoundly familiar: from the late-night meetings to the copious cups of PG Tips to the 4am alarm calls. You get the sense that the room is packed with people simultaneously thinking “I’ve been there!”

Today, the focus is on post-production. Chris wastes no time getting into the nitty-gritty of what is arguably filmmaking’s most arduous process. We’re treated to a screening of a short entitled “Foster,” and then shown a re-edited version, which has quite clearly improved it. Lamentably, people are quick to criticise the short rather than offer constructive feedback, which seems a bit unfair and not in keeping with the idea that we’re a community of artists supporting each other, which Chris seems keen to promote. The criticism dies down abruptly once we find out the film’s director, Jonny Newman, is in the room… and once we’ve seen the trailers for his Stage 3 and 4 films. He’s invited onstage to talk about his transition through the Stages, and as self-confessed Stage 2, you can’t help but feel the goal, no matter how distant, is within reach.

After another break, things take a more serious turn. Post-production remains up for discussion, as we see each stage of post for Chris’s 1998 film Urban Ghost Story. It’s an intricate process, and a little disheartening to see, but Chris isn’t one to shy away from the reality of making art of this kind: the challenges faced in post are often what make or break a filmmaker, and yet it’s consistently underplayed. (Incidentally, Shane Carruth nearly gave up on Primer because he faced such a nightmare in post.)

Chris talks us through copyright and the legal side of matters, distribution, and then we cover film festivals. It’s clear these are the parts people would rather pretend aren’t a problem. Chris won’t let that happen. He tells us pragmatically what we probably don’t want to hear – that it’s no walk in the park, it’s a panic-inducing, mind-shattering, running-around-lost-in-the-woods-Blair-Witch-style ordeal. It’s the tunnel at the end of The Shawshank Redemption that we’ll have to crawl our way through at an interminable snail-pace. But not once are we led to believe it’s not possible.

Chris wraps things up with a few words of wisdom. There’s a tangible sense of awe in the room – people clearly feel encouraged, querying What-Might-Be this time next year. We’re then shown a montage of all the titbits of advice we’ve posted to each other on the GFM online network in the weeks before the class. (Amongst the posts, I notice Fay Rusling has attended and made a contribution, who I’ve unfortunately missed the chance to thank in person for helping to write my personal, absolute favourite, hands-down Funniest Show in All Creation, Green Wing: Fay, if you’re reading – thanks!!) But of course, the main thing everyone’s bound to take away from this last piece of footage is what we’re all reminding each other to do. Keep going. Never give up. Believe in yourself. The abundance of JUST DO IT posts speaks volumes. And it’s the parting words that really resonate. There is no destination, just the journey.
20.45
After a few final drinks to bring the weekend to a conclusion, my iPhone lets loose a short staccato blast. It’s one final email from Chris: another surefire sign that this man never sleeps. I manage to read it, though admittedly I don’t take much in – along with every other GFM-er, I’m now completely shattered. One thing’s certain: we might all be exhausted but we’re certainly all planning out our next projects already, with a fresh perspective on who we are as filmmakers, and on how to go about it at each step of the way. Chris hasn’t lied: it’s a challenge, no question. But if filmmaking’s Shawshank and we’re all Andy Dufresnes, then Chris is Red, and he’s just handed us the rock hammer.

The tunnel behind the Raquel Welch poster awaits.

Functional cookies enable this website to provide you with certain functions and to store information already provided (such as registered name or language selection) in order to offer you improved and more personalized functions.

Performance cookies gather information on how a web page is used. We use them to better understand how our web pages are used in order to improve their appeal, content and functionality.

Marketing / Third Party Cookies originate from external advertising companies (among others) and are used to gather information about the websites visited by you, in order to e.g. create targeted advertising for you.