“I didn’t climb the mountain to die, I climbed it to live.”

This, and many other truly inspirational sayings and nuggets of wisdom from the mighty film-maker Chris Jones, were but some of the highlights of this weekend’s jam-packed crash course in film-making.

Film-making had always seemed like “the other side” to me. Being a script consultant and writer, script – or indeed story as it rightly should be phrased – is king! But a King doesn’t operate alone. In fact, film-making is a collaboration between a huge amount of creatives who depend upon one another. The script is only the start.

This is why I made the decision to attend the Guerilla Filmmaker’s Masterclass 2013. In order to truly understand the importance of the craft of screenwriting, and to appreciate what role you are playing when you are optioned to write a script or to consult upon/script edit an existing script, you really need insider knowledge.

Saturday morning and delegates filtered in. I’d arrived at the hall early to purchase Chris’s Guerilla Filmmaker’s Handbook – I wanted to get one before they sold out and to get it signed. Having been to the London Screenwriters’ Festival, I know how difficult it can be to catch up with people once the adrenalin-filled adventure is underway. And if you’ve seen Chris leading a course/talk/workshop before, you’ll know what I mean by adrenalin!

Taking my seat I immediately got talking to another delegate, and then another joined in as well, and before we’d even got started with the business of film-making these two delegates had already found a promising collaboration opportunity. ‘He’s an actor who likes action movies, and I wanna make zombie films!’ declared my enthusiastic neighbour in response to one of Chris’s motivational pauses in the seminar, during which delegates shared their advice, aspirations and discoveries. 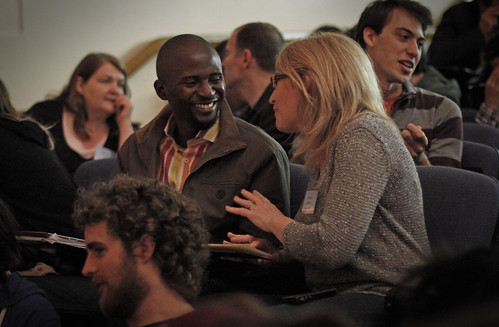 The two days were structured really well. With a range of skilled people in the room, from writers to story board artists, actors to sound engineers, composers to directors and everyone in-between, the content could easily have been really overwhelming for those of us who didn’t know as much about the technical side of film-making. We needn’t have worried. Chris’s opening pep talk, full of motivational advice, gave us the belief that we are all capable of achieving great things.

“There’s nothing stopping you creating/filmmaking, except the decision not to.”

Having identified our fears, and the projects that we were stalling because of these fears, we moved onto the mechanics of story; key for both writers, directors and their respective editors. But far from just rehashing the stages that govern The Hero’s Journey, Chris showed us how those stages apply to every one of us in our own film-making lives. The moral of the story? Choose the heroic path and go for it! You’re guaranteed to lose battles along the way, but the rewards will far outweigh the hardships.

“If you fail to plan, you plan to fail.”

Next up was planning. Chris explained ways into the industry, and made clear how sustainability is key. You need to find ways of making money, and ways to use this money effectively. Low-budget film-making is accessible to everyone so long as resources are sourced and used wisely. Chris has devised a 5-stage career plan that will take you from that tentative “newbie” stage right up to the professional big-buck movie stage. One delegate commented on twitter:

"That 5-stage career plan is worth the price of admission alone. #Gfilm" (@OnTheTrainProds)

The importance of game changers in the industry was the next area being scrutinised, with delegates being reminded that social media is our top work and selling space. Knowledge and information is readily available via the Internet, and outlets for showing and selling your films are aplenty thanks to sites like Vimeo/YouTube. But to get your film made and seen, community is key. Build these communities via networking in social media and in real life, help each other, and work together to achieve wonderful things. 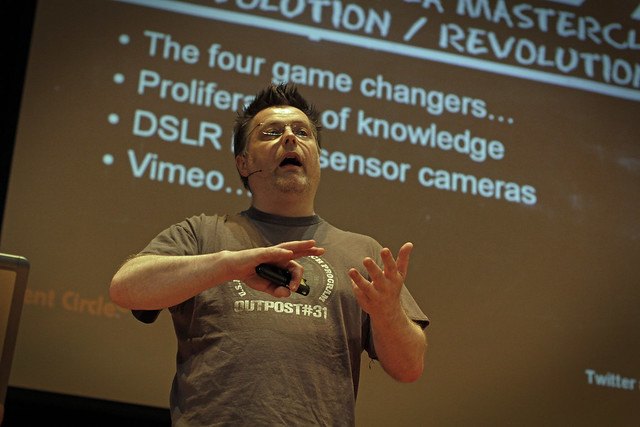 Micro-budget feature-making was a hot topic, because more often than not we all have great stories we want to film but zero cash! It can be tempting to go overboard on the latest and best kit, but really your investment should be in the key things that will really make your film stand out. This includes actors, who are the emotional heart of your film, and sound editing. If there’s one thing that can kill your movie, it’s bad sound, and I for one was astonished – whilst watching one of the many series of clips we saw as part of the course – to discover the sheer amount of work that goes into this aspect of a movie.

“What’s the point in good dialogue if you can’t hear it?”

Equipment-wise, make sure you have a decent camera and tripod. This needn’t mean big bucks – often the best equipment you can get is borrowed – which brings us back to the importance of a community through networking and through helping others; paying into the favour bank. It nearly always boils down to who you know, which is another reason to furiously network. Not only can you find opportunities through others, but you can strike up great working relationships that could see you benefit from equipment and other resources such as locations. One vital thing to keep in mind when making a low budget film is that most stories can be told within any environment. If you happen to have access to a great location, actor or prop that will benefit your film, then write your script around them.

The clips Chris showed throughout the day were really useful. I particularly enjoyed the breakdown of lighting (again, another area of film-making that is so easily overlooked by those who don’t fully understand what’s involved, and an area that is time-consuming but essential) and the comparison clips, which were incredibly eye-opening. I’ve already mentioned my awe at the sound work involved in a movie, but the editing is equally as crucial. We watched a stage 3 short made by Jonathan Newman, critiqued it, and then watched the re-cut version which implemented a lot of our observations and made it much, much better. And to our surprise, and shock, he had been sitting at the back of the hall the whole time! 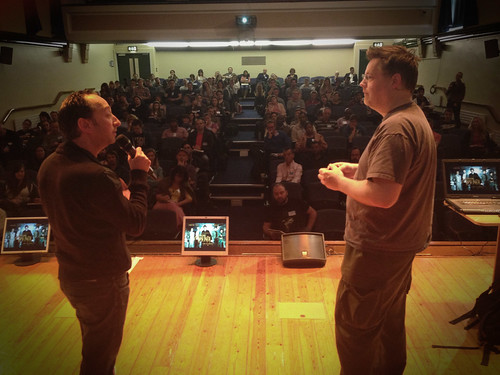 These sorts of surprises are exactly the sort of thing you can expect from well-connected and astoundingly generous Chris, who puts a lot of time, effort and thought into not only the two-day event but all the other perks for delegates. Just like London Screenwriters’ Festival, the Guerilla Filmmakers Masterclass has its own social network. In this network you have access to all the other delegates, a forum, a chat area, showcases of delegates’ films and a wealth of additional learning/reference material. At the end of the second day, we didn’t quite get onto the section about festivals, so Chris is filming a special video covering that which will be uploaded in the next week or so.

During the two days, we covered budget and had a sample budget sheet handout to look over. I for one had no idea quite how many things you need to take into consideration, and these costs mount, which reinforces the need to cut costs wherever possible through pooling talent and resources. This doesn’t, however, mean we should cut back on basic comforts – always feed your team and reserve some money for the smaller, inevitable production office costs such as the need for couriers.

Quick, we need to get this important gear to location X!

As a writer and script consultant/editor, I found the process from script to screen fascinating. Sure, you need a great script with a great concept and story, but that’s just the beginning. The script is essentially only the initial seed. That seed won’t grow unless you allow the gardeners to do their job of nurturing the seed. Just in case you’re not a metaphor addict like me, I’m saying that you as the writer must let the film-making team do their jobs. The script will change – it’s unavoidable. Once the actors, directors, sound team and editors have done their part, your tree will have matured, and once the film has been further edited and re-cut to within an inch of its life, your tree will have blossomed whether you wanted a blossom tree or not. OK, so perhaps I’m getting a bit too carried away with the metaphors here, but the hard fact is…

A film is a collaboration and a script will evolve because of this.

This is where script feedback and editing can be so very useful right from early drafts, and this course has enriched my strategy for these roles. Cutting out expensive or badly-paced scenes, and ensuring the script is as condensed as possible (even as short as 80/85 pages will ease production – after all, 8 pages a day on a 10-day shoot is far easier to cope with than 10 or 11 pages a day) will ensure that your script is as workable as possible from the offset. Already I am reading scripts with this new perspective in mind.

Not only this, but I am watching stage 1, 2 and 3 short films with not only script but film structure in mind. Only just this morning I watched one and remarked upon elements such as lighting and sound issues. One of the utterly sensible and obvious things about sound, which I didn’t realise until Chris spelt it out to us, was how “sound needs perspective”. This film-making point alone has revolutionised how I watch films.

Whilst we can criticise, though, it’s important to remember that everyone’s opinion is valid and everyone, therefore, is right. As viewers we are“expert consumers,” and as such an audience’s personal relationship to your movie is what defines their experience. With this in mind, Chris reminds us that truth & story cross over.

We cry at a film because we connect with the story/characters; it becomes the “truth” to us.

This again boils down to mastering story, and finding the best actors possible to convey the emotional beats of your story.

Day 2 (yes, there’s more!) went into even more detail about film-making including post prep, music, sales, making the deal, UK distribution, delivery and more. Seriously, I could write a friggin’ book with the amount of information we got during these intense but invigorating two days. Oh no, wait, Chris and partner in crime Genevieve Jolliffe have already done that! Check out their book here. There’s also an online course, called “Making The World Class Short Film” here. I heartily recommend the Guerilla Filmmaker’s Masterclass, which is ideal not only for aspiring and working film-makers but for all other skilled film-making team players too. And that includes you, the writers, and my fellow script readers/consultants/editors. Knowledge is gold dust and a course like this (which, quite frankly, is like a motivational workshop and film school education all rolled into one), combined with learning by DOING, will set you up well for your entry into whatever role in film-making you aspire to.

Check out my live tweets from the event here, and be sure to follow the #gfilm hashtag on twitter for lots of free tips and networking!